Nissan has decided to delay the restart of the bulk of its manufacturing operations in the United States, while the company’s top executives in Japan continue to revise the company’s strategy.

“We’ve extended downtime at our manufacturing facilities for further evaluation of the COVID-19 pandemic, market demand and supplier readiness before setting a restart date,” a Nissan spokeswoman said in an e-mail.

Nissan already resumed operations at the Infiniti powertrain plant in Decherd, Tennessee, which began to gradually resume production as of May 1. 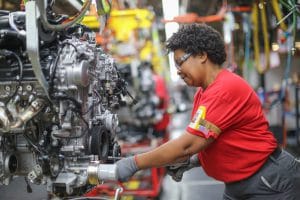 Meanwhile, Nissan, which is facing major business challenges after a difficult stretch going back almost two years, is in the midst of a broad re-examination of the strategy put in place under the company’s former CEO Carlos Ghosn, according to press reports from Japan.

Nissan reportedly expects to reduce its operations in Europe to focus on the United States, China and its home market of Japan where it has steadily lost ground to archrival Toyota under a plan that represents a new strategic direction for the embattled carmaker, people with direct knowledge of the plan told Reuters.

The “operational performance plan,” which is expected to be announced later this month, goes beyond fixing problems from ousted Ghosn’s aggressive expansion drive, Reuters reported.

Pursuit of market share, particularly in the United States, led to steep discounting, which hurt the brand’s reputation with American consumers. Under the new, (three-year plan Nissan reportedly aims to restore dealer ties and refresh line-ups to regain pricing power and profitability, according to Reuters.

(Nissan is focusing on strengthening its Chinese sales as part of the company’s planning efforts.)

The plan also aims to cut competition and expand cooperation with alliance partners. Nissan will follow Mitsubishi Motors Corp. in the development of plug-in electric hybrid vehicle technology, with Mitsubishi leading the way in Asian markets outside China and Japan. France’s Renault SA – the third automaker in the Alliance – will likely focus on electrical vehicle technologies and Europe where emission regulations are growing steadily tighter.

Nissan expects to maintain a presence in Europe through stepped up efforts with its Qashqai and Juke sport-utility vehicles. In Asia, it plans to further expand sales in Thailand and the Philippines which, with Australia, generate roughly 90% of sales and profit in the region excluding China, Japan and India.

Nissan previously put its annual global production capacity at more than 7 million vehicles based on three daily shifts per plant. The new plan is based on two shifts and puts capacity at about 5.5 million, Reuters reported. No major cutbacks are expected in North America, Nissan officials have said recently.

Nissan’s U.S. models have an average age of over five years. To lower that to 3.5 years, the automaker plans to launch new and significantly redesigned cars, including a next-generation Rogue crossover SUV, the people said. It will also reduce sales to rental and other fleet operators, according to reports from Japan.

(Nissan is also focusing efforts on selling more vehicles in the U.S.)