Adopting horizontal three-axis machining may require much consideration, but Alicat Scientific can attest to almost 50% cycle time reductions with a Kiwa horizontal machine. 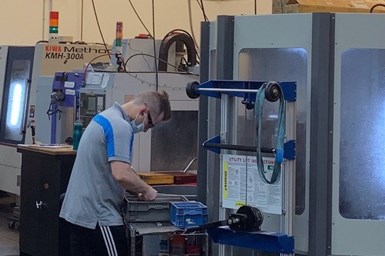 Multiple machine tool suppliers suggested ways he had already tried. “The only thing I knew at the time was vertical machining, so that’s what they showed me,” Camron says. “Nobody was encouraging me to try new things.”

This changed when Camron met Tony Harrod, general manager of Methods Machine Tools’ technical center in Phoenix, Arizona. “Tony talked to me about different ways to machine our product,” Camron says. “I found many different methods to do things, but only Tony showed me the benefits of horizontal machining.”

Getting Over the Roadblock

Camron wasn’t convinced overnight. Changing setup and machining processes was a daunting task, after all. “The prices and the sizes were the factors that were limiting me,” he says. Addressing concerns like this took some research.

The first step was determining if horizontal machining was the right choice for Alicat. “You have to look inward and examine what you do, how you do it that way and why,” says Bernie Otto, Methods Machine Tools’ director of technical product support. “For some shops, horizontal machining is just not the right fit.”

A job shop that does small runs of parts or doesn’t keep machines completely occupied may not be able to reap all the benefits that come with switching from vertical to horizontal machining. Horizontal machines might also prove unsuited to jobs requiring exceptionally tight tolerances.

“If you require more consistency during heavy cuts, a vertical machine offers more uniformity,” says Bob Meier, Methods’ technical product manager. “On a horizontal machine, the farther you move away from the B-axis center and pallet face, the more likely it is your rigid cutting conditions will weaken.”

Just because a shop’s current methods don’t suggest horizontal could be of great benefit doesn’t mean giving up, however. “Now and then, you need a fresh set of eyes,” says David Moore, an application engineer at Method. “The majority of people not engaging in horizontal machining just haven’t been introduced on how to do it yet.”

In many cases, Alicat’s being one of them, switching from vertical to horizontal had the potential to increase spindle time while reducing setup time.

Expanding Your (Tooling and Pallet) Horizons 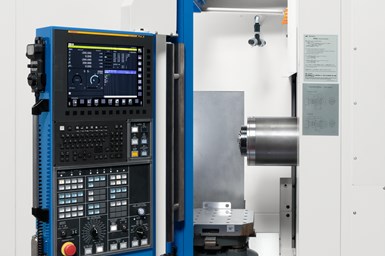 Much of horizontal machining centers’ efficiency comes down to tool- and workpiece-handling.

Many horizontal CNC machines are equipped with massive automatic tool changers (ATC) compared to their vertical counterparts. These tool changers are field-expandable and can drive significant productivity boosts. “The more tools you have on a machine, the more jobs you can have lined up,” Otto says. “And that means less manual intervention and less changeover time.” Redundant tooling can even enable a horizontal machine to run lights-out for extended periods.

How many tools can horizontal machines hold? As an example, Kiwa Machinery supplies machines with automatic tool centers that have a capacity of 120 tools — which Methods can then upgrade to 240 tools. CNC machines from OKK Corporation start at 60 tools and, just like Kiwa machines, are compatible with tool rack expansions from Methods that double this tool capacity.

“Expandable ATCs are versatile options that allow you to scale your machining capability as your shop grows,” Otto explains. “You don’t have to pay for anything you don’t need upfront, and when the extra work comes, you can double your tool capacity almost overnight.”

Even without expandable ATCs, Otto says, most horizontal machines are equipped with more tools from the get-go. Vertical machines typically start with 30 to 40 tools, while horizontals come with 60 to 90 tools standard.

“In most cases, going from a vertical to a horizontal machine automatically gives you a tooling advantage,” Otto added.

“After the first horizontal machine, I realized the restrictions of a vertical machine,” Camron says. “My imagination just opened up to everything possible in a horizontal.”

Let the Chips Fall Where They May

One of the more apparent benefits of switching to horizontal machining is chip flow.

Vertical machines often require complex, comprehensive chip management systems to keep the workpiece and other critical components clean. Sometimes, this can require stopping the machine and cleaning it before restarting the program. In horizontal machining, the chip flow is quicker and cheaper: the chips naturally fall into the chip conveyor.

Benefits of the B-Axis

Another benefit of using horizontal CNC machines is the B-axis, which enables simultaneous machining of multiple machine parts using a tombstone. While one cycle runs and machines numerous parts, the operator can prepare the next tombstone to maximize production.

“You can hit multiple parts in one setup instead of having to do each part individually,” Moore says. “Anything with multiple setups that need to have three sides machined should be a candidate for horizontal.”

Machinists can obtain similar results by installing a rotary table on a vertical CNC machine, but that requires a fourth-axis rotary on each pallet. 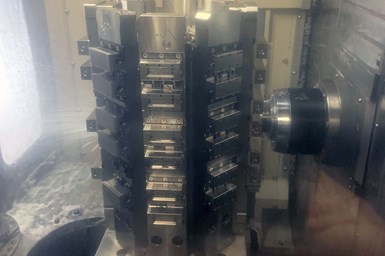 Before speaking with Method, Alicat used five vertical CNC machines, one of which had a PC2 and a fourth axis. Camron found that the Kiwa KMH 300 fit his machine shop’s footprint and addressed machining challenges. “Until I found the KMH 300, everything was huge,” he says. “But in terms of floor space, switching from two vertical machines to one horizontal was a no-brainer.”

Between figuring out the best way to implement tombstone tooling and workpiece holding, Camron ended up working 80 hours per week for a few weeks. Other aspects, however, were more straightforward. Since Camron used many “if/then” statements and loops in his CNC programming, the programs transitioned seamlessly to horizontal machining.

Learning the ins and outs of horizontal machining paid off. When other managers and directors realized the output one Kiwa KMH 300 gave them, they asked Camron how soon they could get another up and running.

Less than two months later, the shop had another Kiwa KMH 300. By the time Alicat received the second machine, Camron already has his fixtures and tombstones dialed in. The second Kiwa was mass-producing quality parts within three days.

“After the first one, I realized the restrictions of a vertical machine,” Camron says. “My imagination just opened up to everything possible in a horizontal.”