Electric-Vehicle Race Heats Up as Detroit Makes Its Move

By Ben Foldy and Nora Eckert 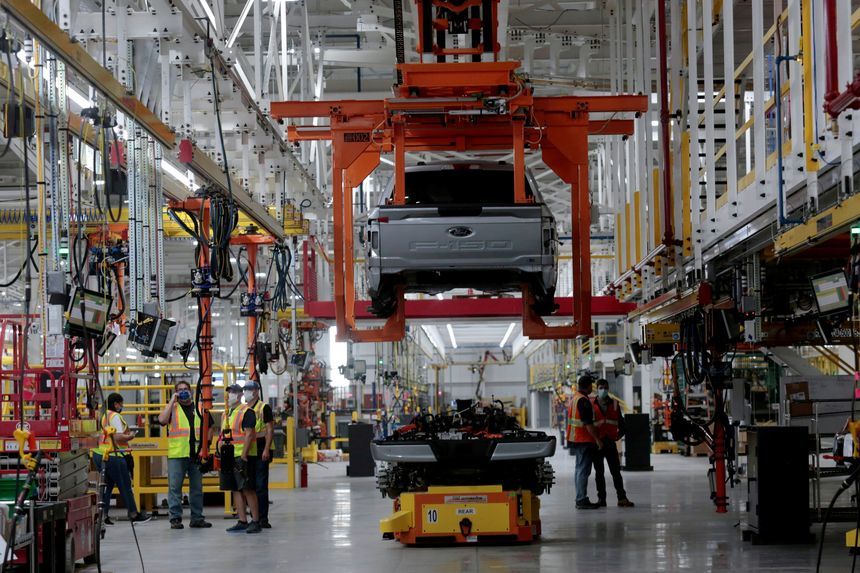 Ford plans to double production for its forthcoming electric truck, the F-150 Lightning.

The electric-vehicle race is tightening, with both Ford F 2.10% ▲Motor Co. and General Motors Co. GM 0.64% ▲highlighting new electric pickups, and car companies getting ready to release a barrage of new battery-powered models this year and next.

Auto executives have spent the past few years talking up their ambitions, allocating billions of dollars in new investment to add more electrics to their global lineups. But so far, the transition has mostly taken place behind the scenes with engineers and designers readying the next generation of vehicles.

In the coming year, car buyers will start to see those efforts show up more on dealership lots. Auto makers plan to launch dozens of new electric models over the next two years in a range of different styles and at varying price points, according to analysts at Bank of America.

The arrival of these EVs shifts the pressure on car companies from developing them to convincing consumers to buy them.

“There’s a new world coming,” said Carlos Tavares, chief executive of global auto maker Stellantis STLA 0.54%▲ NV at the CES electronics show on Wednesday. “Now, the machine is on, and we are going fast forward.”

Ford unveiled the battery-powered version of its F-150 pickup, joining other auto makers in the nascent electric-truck segment. The F-150 Lightning undercuts several rivals with a starting price around $40,000. Photo: Dominick Sokotoff/Zuma Press

On Tuesday, Ford F 2.10% ▲said it would nearly double production for its forthcoming electric truck, the F-150 Lightning, after it received a higher-than-expected number of reservations. The truck goes on sale in limited numbers this spring.

The move sent Ford’s stock soaring, pushing its market value to $97.6 billion as of Friday’s close, past GM’s and over Rivian Automotive Inc., a hot, young startup that recently released an all-electric truck and went public in November.

GM unveiled its rival electric truck Wednesday, a battery-powered version of its popular Chevy Silverado, and Chief Executive Mary Barra listed about 10 EVs that will be on sale within two years, compared with just two today.

Stellantis, which owns Jeep, Ram and other auto brands, said this past week that the nearly 100-year-old Chrysler brand would go exclusively electric by 2028. The car company also disclosed it had a deal to sell electric vans to Amazon.com Inc., making it a competitor to Rivian, which also has an agreement to sell vans to the e-retailer.

Rivian’s stock dropped 11% on the news Wednesday, and then briefly fell under its $78-a-share IPO price for the first time since it went public. It closed Friday at $86.28 a share.

A spokeswoman for Rivian said that the Stellantis deal was good news for the industry as a whole and that Rivian’s own Amazon partnership was intact, thriving and growing.

The shift to electric is intensifying the battle between traditional auto makers and newer players edging into the more than century-old car business. 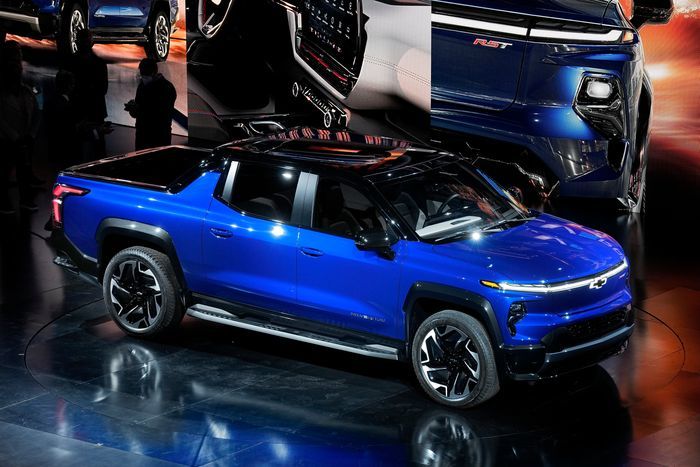 GM has unveiled a battery-powered version of its popular Chevy Silverado.

Until recently, though, investors have largely tilted their bets toward Tesla and other startups that are focused solely on making electric vehicles. These companies have raised billions of dollars in funding in recent years and don’t have the capital constraints of having to transform a business built mostly around the gasoline engine. Tesla, worth more than $1 trillion at Friday’s close, is now the world’s most valuable auto maker.

For all the buzz, car companies—both new and old—still have a way to go in convincing consumers to ditch gasoline.

Electric-vehicle sales are on the upswing, rising 88% year-over-year in 2021, but they still only account for about 3.2% of the total U.S. car market, according to research firm Motor Intelligence.

In the U.S. alone, Tesla sold about 352,500 vehicles in 2021, or about 72% of all battery-electric vehicles purchased, Motor Intelligence estimates. Tesla doesn’t break out deliveries by region.

A Rivian R1T electric pickup truck outside the Nasdaq MarketSite in New York in November when the company went public.

For many car buyers, an electric vehicle remains a tough sell, in part because there isn’t wide availability of charging stations and gas-engine models are more affordable to buy off the lot, despite tax credits aimed at making electric vehicles more attractive to consumers.

“We have a lot of electric-vehicle conversations,” said Ryan Gremore, president of O’Brien Auto Team of Illinois. “But it hasn’t translated into consumers coming in, saying ‘I gotta have one.’”

Such sentiment has done little to lower the auto industry’s ambitions, with executives saying they need to add more zero-emissions vehicles to their showrooms to meet stricter air-pollution regulations globally.

And with more options coming, the calculus is changing for buyers. A survey conducted by consulting firm AlixPartners LLP in August found 19% of U.S. respondents say they are very likely to make their next car purchase an electric vehicle, up from 5% in 2019.

“The question on EVs is much less right now about demand than it is about supply,” said Dan Levy, an analyst for Credit Suisse.

Brad Sowers, a car dealer in Missouri, said the drumbeat of news on electric vehicles is sparking more interest from his customers. Mr. Sowers said he got 30 orders for the new electric Silverado within an hour of its unveiling. The new truck doesn’t go on sale until early 2023.

Weston Wellington, a finance executive with a horse ranch and farm, said he is ready to go electric for his next truck, saying the performance is superior to internal combustion engine pickups. He said he had been leaning toward Rivian’s new R1T electric truck, but the new battery-electric Silverado intrigued him.

“I’m not sure which one,” Mr. Wellington said. “I’m just expecting there’s going to be a lot to choose from.”