Many OEMs are better equipped to insource manufacturing than they imagine themselves to be. Utilization data can reveal the capacity that is ready to be used an alternative to supply chains.

We have come to a time of insourcing. Or, at least a time of serious attention to the value of insourcing. Companies that might once have been inclined to send every aspect of part production out to suppliers are now questioning this mode of operation, and looking to bring some of the most vital or vulnerable aspects of their production into their own facilities. But one of the biggest obstacles is an unknown: the uncertainty about whether an OEM company possesses, or can reasonably develop, the capacity to make this shift. Frequently, manufacturing enterprises do not know how much productive capacity they possess, says Bill Bither, CEO of industrial IoT platform MachineMetrics. And more to the point, they generally imagine they have less than they do. Some companies that want to insource are already equipped to do so.

That we are now looking to insourcing stands to reason, and could have been predicted. The wave of outsourcing through the 1990s that became offshoring in the 2000s proceeded in part simply because it was a wave. Leaders of companies embraced the delegation and distancing of their manufacturing because this seemed to be the way manufacturing was coming to be done. But it is the nature of waves that they roll too far and they crash. The failings of long, lean, specialized supply chains were revealed in 2020. The disruptions of the pandemic year led to sudden changes in demand and in the availability of plants and their personnel, leaving OEMs at the ends of these chains to do without and regroup. In 2020 (and still today), a valuable asset to have under-roof would have been available, adaptable production capacity beholden to no other user and not separated by shipping distance. That lesson learned will shape choices going forward. But to what extent is that under-roof capacity already there to be used?

MachineMetrics offers a machine monitoring and data analysis system for CNC machine tools. Bither describes how he is now seeing companies apply this system’s analysis to the question of insourcing. A recent example involved a heavy equipment maker with nine plants and about 300 CNC machines. The company was preparing to invest in more capacity to take in more of its own production, but discovered that much of the investment was not needed. Applying machine monitoring throughout the plants revealed gaps of time in which machine tools were waiting, unused. These findings likely saved the company millions of dollars.

But couldn’t this waiting capacity have been seen by the people who work with it every day? Yes, and they certainly did see it. However, to appreciate the full impact, root causes and potential solution for any underutilization incident is too much to do from within the demands of a typical day in a production facility. Thus, underuse of assets becomes accepted, part of the culture and even invisible. Bither says, “We develop an expectation about what is a normal level of output for a given plant or for a given workday.” This comes to feel like optimal. Then, compounding matters, the friction of uncertainty impedes cooperation among sites in the same organization. “The plant getting a request for help from a plant facing a surge might be unsure of its capacity to help, and might decline just out of caution,” he says. Meanwhile, an outside contract manufacturer has nothing but incentive to say yes when work is offered. Uncertainty thus leads to outsourcing practically as the natural course. The unseen factor in all this is the original manufacturer’s room for improvement in how it uses its capacity. 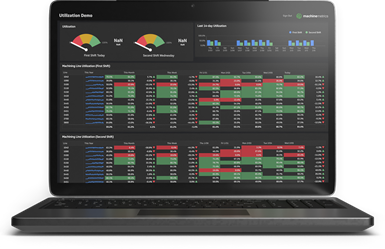 Companies adopting machine monitoring often soberly come to see just how large this room for improvement is, Bither says. Upon first implementing capacity monitoring, he says, “The typical machine tool utilization rate we see is less than 30%.” That includes unattended hours. Focusing on the staffed hours paints only a slightly more encouraging picture. “During key hours, 8:00 to 4:30, we see utilization typically at 44%.” These are levels of productivity far below what most company leaders would assume their facilities are achieving.

Yet just putting in place the system of data monitoring often produces an initial rise in these numbers. Valuing utilization causes utilization to rise, as people respond to this placement of value. Productivity is, again, culture-driven.

There is more, Bither says. Monitoring data can reveal capacity not only in unnecessary machine wait time, but in unnecessary downtime as well. Patterns in the data can predict maintenance needs so that these are performed only as required. Select users of MachineMetrics’ services have turned to the company to apply artificial intelligence to CNC output data to correctly anticipate tool failure over long production runs, or the failure of crucial machine components such as bearings.

The culture is the first step, he says. Manufacturers seeking to find their capacity using data need to reorganize to make use of the data. This typically means appointing leaders that are empowered to discover and solve the inefficiencies at the root of capacity underuse revealed in this way, and also to marshal and combine the opportunities for additional capacity found in otherwise separate departments or facilities.

But the opportunity is there, he says. Digital technology and data analysis now provide previously unmatched insight into the performance and potential of manufacturing resources. If this is a time of insourcing, the timing is good. Technology offers new potential to look within and find the capacity needed.